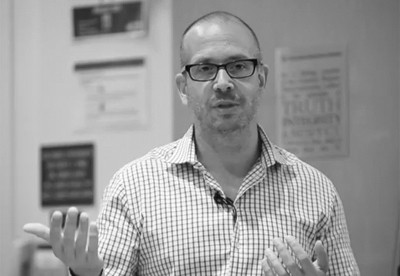 Mark Hansen joined Columbia Journalism School in July of 2012, after a decade of shuttling between the west and east coasts. In Los Angeles, he held appointments in the Department of Statistics, the Department of Design Media Arts and the Department of Electrical Engineering at UCLA — literally forming a triangulation of data, art and technology — and was a Co-PI for the Center for Embedded Networked Sensing, an NSF Science and Technology Center devoted to the study of sensor networks. While in New York, Hansen was a long-standing visiting researcher at the New York Times R&D Lab and a consultant with HBO Sports. Hansen works with data in an essentially journalistic practice, crafting stories through algorithm, computation and visualization. In addition to his technical work, Hansen also has an active art practice involving the presentation of data for the public. His work with Ben Rubin at EAR Studio has been exhibited at the Museum of Modern Art in New York, the Whitney Museum, the Centro de Arte Reina Sofia, the London Science Museum, the Cartier Foundation in Paris, and the lobby of the New York Times building (permanent display) in Manhattan.  Hansen holds a PhD and MA in Statistics from the University of California, Berkeley and a BS in Applied Math from the University of California, Davis.