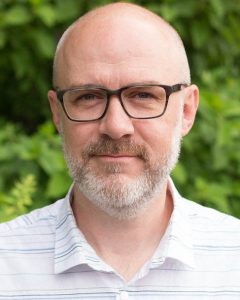 Jon Keegan is a Senior Research Fellow at the Tow Center. Prior to joining the Tow Center, Jon worked 18 years at The Wall Street Journal on data and building news apps. Recently he built WSJ’s award-winning “Blue Feed, Red Feed” which looks at political polarization on Facebook. Jon worked on some of the earliest data-driven interactive projects at WSJ and led the interactive news graphics team for two years. He later worked as a Visual Correspondent and covered a wide array of topics, employing design, data visualization and code to explore hidden patterns in technology, culture and society. Jon is also a recovering illustrator whose artwork has appeared in The New York Times, The Wall Street Journal, US News & World Report and many other newspapers and magazines. He has a BFA from Syracuse University, and recently moved from Brooklyn to the country with his wife and two boys.