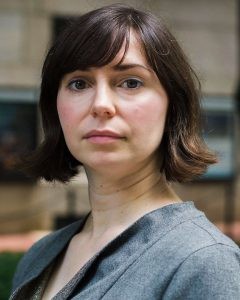 Susan McGregor is Assistant Director of the Tow Center for Digital Journalism & Assistant Professor at Columbia Journalism School, where she helps supervise the dual-degree program in Journalism & Computer Science. She teaches primarily in areas of data journalism & information visualization, with a research interests in digital security, knowledge management and alternative forms of digital distribution. McGregor was the Senior Programmer on the News Graphics team at the Wall Street Journal Online for four years before joining Columbia Journalism School in 2011.

McGregor was named a 2010 Gerald Loeb Award winner for her work on the the WSJ’s “What They Know” series, and a finalist for the Scripps Howard Foundation National Journalism Awards for Web Reporting in 2007.

In 2012, she received a Magic Grant from the Brown Institute for Media Innovation for her work on Dispatch, a mobile app for secure source communication, and in 2013 she was awarded a Knight Prototype grant to develop DataDocs, an platform for creating interactive, evergreen web videos. In fall of 2014 she received a Computational Journalism Focused Research Award from Google to develop InfoScribe, a crowd-sourced transcription platform for investigative journalism documents.

In addition to her technical and academic work, McGregor is actively interested in how the arts can help stimulate critical thinking and introduce new perspectives around technology issues, occasionally creating small prototypes and installations. She holds a master’s degree in Educational Communication and Technology from NYU and a bachelor’s degree in Interactive Information Design from Harvard University.